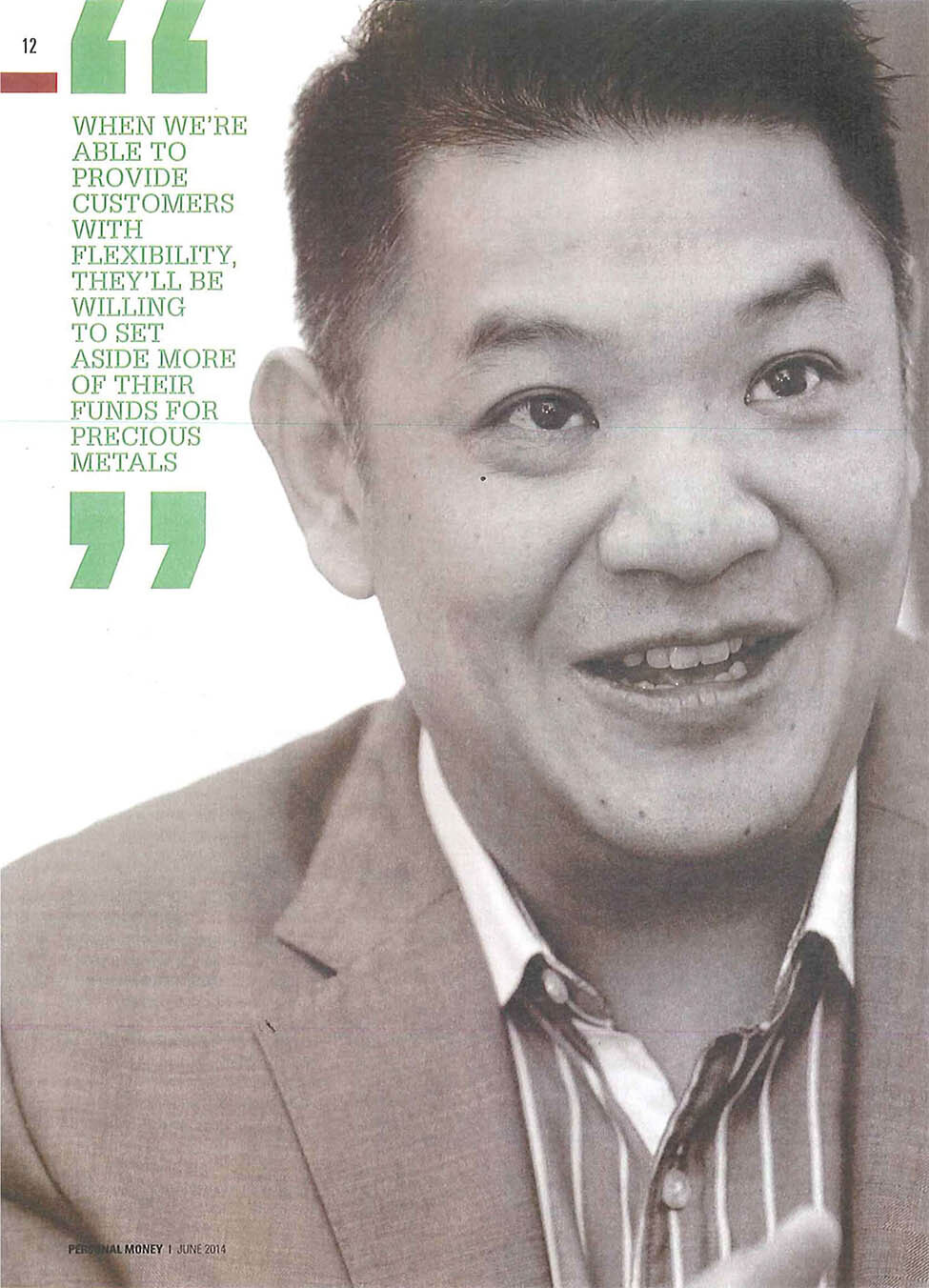 When Malaysian Victor Foo started up Singapore Precious Metals Exchange (SGPMX) in July 2013, it was with the intention of making gold and silver bullion more accessible to the masses. Foo’s exchange was the first of its kind in terms of the services offered, and he aimed to hit the US$100 million ($125.6 million) turnover mark within a year.

Today, SGPMX has over 10,000 retail customers globally, and another 5,000 from the exchange. Earlier this year, it cemented a partnership with American bullion refiner Scottsdale Mint as its broker in North America, and looks towards forming more partnerships worldwide to reach its turnover target.

“We’re almost there, but growing the company is about having the right partners. Reaching the US$100 million mark can be done only by leveraging with the right people, like Scottsdale,” says Foo. “I believe by the end of July, all [the] partnerships will be in place.”

SGPMX is a physically backed, peer-to-peer exchange offering a one-stop platform for bullion investors to buy, trade or store their investments. Exchanges can be made only if the bullion has been bought via, and then deposited at, SGPMX’s vault, and customers first need to fund their account to ensure a smooth and instant transaction.

“We put it at US$1,000 because we want to share this opportunity with everyone regardless of social standing and economic status. [Comparatively,] if you walk into any commercial bank today, the minimum [entry amount] for a fixed deposit is RM5,000,” says Foo.

He began his business as a bullion retailer and customers would invest, on average, RM5,000 in bullion. With the additional services SGPMX now offers, he adds, the amount has increased, gaining traction in North and South America, Australia and Japan.

SGPMX has vaults with Singapore security services company Certis Cisco and Singapore Freeport storage. For an annual storage fee of 0.5%, including insurance, all bullion pieces stored at the vaults are fully segregated and allocated to the individual owners, who can also request to view their bullion. Paying for such services makes more economical sense as well, rationalises Foo, referring to the hefty charges involved when storing bullion at home.

“If you want to insure any amount of gold or silver at home, you probably have to spend some money on a sizeable safe and put in an alarm system — it will cost you to set it up — and the premiums would be about 5% a year. It’s not conducive and most people cannot afford it.

“[With SGPMX] whatever you buy [and keep with us] is fully accounted for; there is no sharing and we don’t unitise our storage. If you have eight items to store, we store them for you in eight different permutations. We also have an audit-on-demand service whereby you can request an independent audit specifically for your account. Should you be in Singapore, all we need is 24-hour security clearance and you can come see your bullion at the vault as well.”

In a day and age when secured and authentic investments are of utmost concern, a value-added service investors get, apart from security and insurance, is certification via a paper trail that SGPMX tracks.

“When you want to liquidate [your bullion], a receipt or certificate doesn’t [necessarily] make it authentic. Our system can show where the bar was shipped from, its invoice and customs permit. This paperwork is given by parties such as the customs department and logistics companies,” Foo says. “I can even show how it was paid for properly and accounted for, as the Anti-Money Laundering Act (AMLA) is a big concern these days.”

While investors cannot trade existing bullion through the exchange, they can use the storage services at the same price.

“We can waive the certification [of authentication], but if you want to sell it in the future [via SGPMX], we will have the certification done through third parties. We use the Singapore Assay Office (SAO) in Singapore. We also deal with all the major mints because they have refinery capabilities. So you can send in your bullion to be authenticated or swapped for a small fee and we will facilitate it,” he adds.

While Malaysia’s impending goods and services tax (GST) could be imposed on gold and silver investment products, bullion purchased from SGPMX’s platform is tax-exempt in Singapore.

“Both our storage facilities in Singapore are in bonded rated warehouses. Under a bonded storage, GST is waived because technically this bullion has not been circulated in the market,” Foo explains. “Because of this unique proposition, none of our customers has ever paid [Singapore’s] 7% GST, although the government did waive the GST for investment grade bullion in Singapore at end-2012.

“However, if you do want to bring home a piece of your bullion, you will be taxed on that particular piece if it is a non-tax-exempt bar. The removal fee from the vault is US$50, which goes to pay for the cost of the customs permit and logistics.”

Foo is looking to forging more international partnerships for global expansion. SGPMX is embarking on road shows in Europe, the Middle East and South America, he says, and will be starting an alliance in Australia as well.

The accumulation programme in Malaysia, which is expected to be launched in July, will be localised to ringgit.

This article was first published in the June 2014 issue of Personal Money — a personal finance magazine published by The Edge Communications.