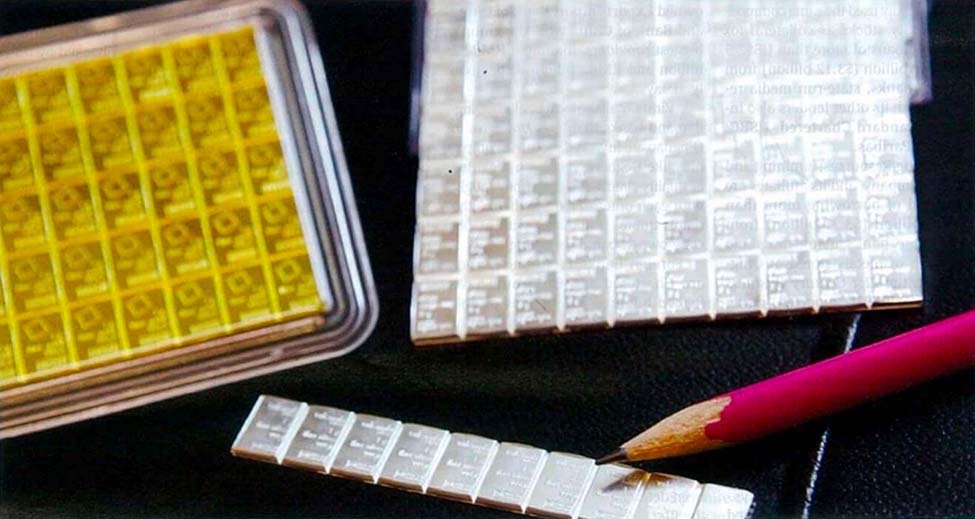 CombiBars can be made out of gold, silver or palladium and squares can be broken off into 1g pieces

Victor Foo says he has invested just about his entire personal wealth in precious metals. And, he even uses precious metals as a form of currency whenever circumstances allow. For instance, he recently bought a car in Malaysia from someone who was willing to accept 600 ounces of silver as payment (that is equivalent to almost $15,000 at current prices). He also recently paid for a house by pledging some or his gold for cash.

Foo is founder and CEO or Singapore Precious Metals Exchange (SGPMX), which operates a retailing and trading platform that allows investors to buy as little as 1g of gold or 10g of silver. All current prices, those denominations would cost roughly $60 and $10, respectively. The idea is for investors to accumulate holdings or gold and silver over time via SGPMX. Standing instructions for monthly GIRO deductions can be made via DBS, POSB, Oversea-Chinese Banking Corp, United Overseas Bank and Citibank.

The accumulation programme has been made possible by an innovative bullion product called the CombiBar. lntroduced in 2011 by Swiss refinery Valcambi, a unit of Newmont Mining, CombiBars can be made out of gold, silver or palladium. Each is perforated like a bar or chocolate. Squares can be broken off into 1g pieces with no visible loss or material and limited loss or value. The silver CombiBars that SGPMX sells weigh 100g in total; the gold bars weigh 50g and 20g.

Valcambi's CombiBar has been hailed as rev­olutionary because it is easier and cheaper to produce than making individual 1g bars. Yet, it can be broken into smaller denominations easily and used as a medium or exchange - which could be useful in the even or hyper­ inflation, a collapse in currency, a bank run or any other kind or crisis.

For Foo, the CombiBars are also a business opportunity for SGPMX. With the silver CombiBars retailing at just $10 for 10g, "even a school kid, instead or pulling coins or dollars into his piggy bank, can buy a silver bar", says Foo. "The procurement process allows the person to average his purchases into very small denominations." Once they have accumulated a complete CombiBar, customers can choose to withdraw it. There is a minimum removal fee from the vault or US$50 ($63), which pays for the customs permit and logistics.

SGPMX has seen its business grow signifi­cantly, following the launch or the exchange. Prior to the launch, the average sale was about US$5,000. Now, the average sale is US$25,000, and enquiries continue to come in, Foo says. The average monthly sale via GIRO is 5g of gold and 50g of silver. The company has more than 10,000 retail customers today and 5,000 registered on the exchange.

A former executive at an insurance broking company in Malaysia who spent 20 years working his way through the ranks to even­tually become a partner, Foo began learning about bullion during the recent global finan­cial crisis. “I knew that was merely the be­ginning or a greater crash," he says. "I looked for an opportunity for myself and my peers to diversify part of our assets into investments of an intrinsic nature.” In gold and silver, he found a product with an internationally accepted benchmark value that was also mobile and could be properly authenticated.

In 2009, Foo started a gold and silver trad­ing business. It was tough going initially. Too small to work directly with the mints, he tried to persuade wholesalers to sell to him. "When we started in 2009, every door that we knocked on was shut in our face,” Foo recalls. "We had to knock on every door multiple times. They would always ask: 'What is your volume What did you do before? Insurance? What do you know about bullion?'"

One major problem Foo faced was that no­body trusted him to hold their assets. He even­tually got around that problem by working with several logistics providers to deliver gold di­rectly to the doorsteps of customers whenever they traded with him. Still, the business model was cumbersome. Eventually, Foo turned the problem into an opportunity by getting into storage services - first with Certis CISCO and later with Singapore Freeport. Customers pay an annual fee of 0.5% of the value of bullion stored, which also covers insurance.

Today, SGPMX is able to work directly with the mints, which ship bullion 10 the company's facilities at Changi Airport. As gold prices climbed, however, Foo realised that the day would come when he would not have the capi­tal to buy back all the gold he had sold to his customers, if they ever wanted to sell. "That’s where the idea of the exchange came about."

Last July, SGPMX launched a trading plat­form. All customers who have bought bullion directly from SGPMX and are using the com­pany's storage services can offer their holdings on the exchange at any price. Gold and silver from outside the system has to be validated and assayed before it can be sold. There is a fee or US$100 to join the exchange as a trad­ing member, and a minimum trading value of US$1,000 is required before a bid or offer or­der can be placed. SGPMX will take a cut or 0.25% on each successful trade.

The accumulation programme was intro­duced earlier this year and has also been lo­calised. International customers using credit cards are charged a 3% fee by the banks. Locals, on the other hand, can accumulate their bul­lion through monthly GIRO deductions. There is a one-time $5 processing fee and a charge or 50 cents for each GIRO transaction.

Foo explains that it took some time to figure out how to price the accumulation programme. Typically, gold retailers charge a premium for smaller amounts sold. Foo likens it to buying a can of Coke at 7-Eleven versus a carton at the hypermarket. In the accumulation programme, however, SGPMX charges the same amount per gram whether the customer is buying 1g or 50g. "We allow a person to buy just 1g of gold at the same price as he would if he bought 50g."

While good for the customer, this pricing model means risk for SGPMX. "We have cus­tomers buying at different points of time, but I can't go to Valcambi and buy 1g at a time. We had to come up with a mechanism to allow people to buy at different prices but still allocate one piece at a time,” he says. “That's a proprietary formula.” 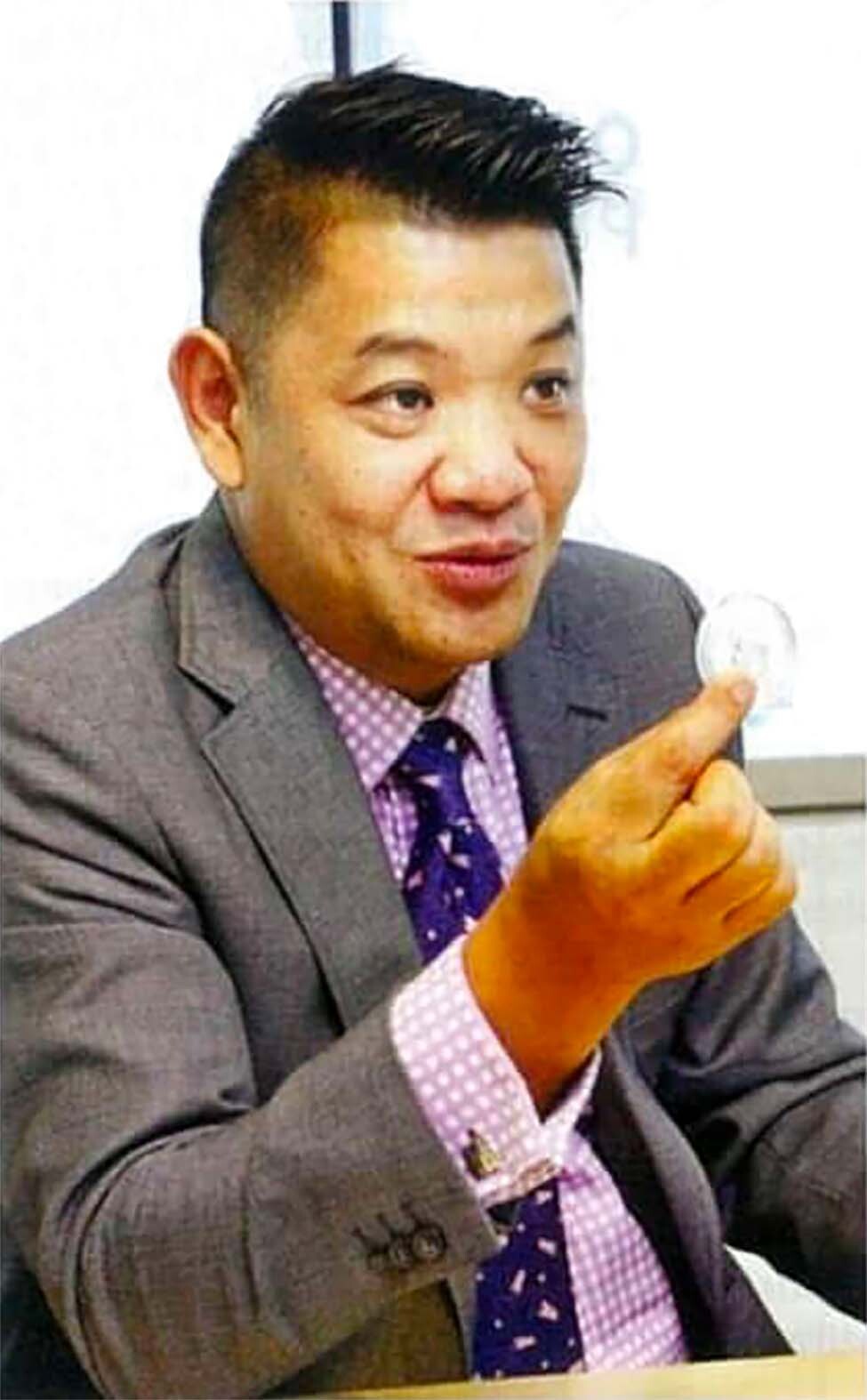 Leaning on the Singapore brand

The Singapore Freeport is an impressive build­ing. Its unmarked walls, clean lines and multiple gates live up to cinematic renditions of se­cure facilities that profressional criminals aspire to break into. Its reputation is safeguarded not just by numerous security protocols but also by the Singapore brand. The city-state rep­utation for safety, security and political and regulatory stability was pivotal to the decision of Natural Le Coultre to replicate its Geneva Freeport here.

Today, the Singapore Freeport is useful in assuring customers or SGPMX that their gold is in safe hands. Access to vaults within the Freeport requires the presence or both a Free­port employee as well as an employee of the company using the vault. Visitors entering and leaving the Freeport are subject to body scans that can detect even a paper napkin in a pocket. Access is difficult even for employ­ees of SGPMX. Richard Khoo, the company's executive vice-president, confesses that he himself has not yet seen some of the gold he bought recently.

How does he know it is there then? Foo ex­plains that SGPMX's inventories are audited rigorously by external parties. And, much like the Singapore Freeport, SGPMX can rely on the reputation of Singapore's systems to ensure its customers that it is a legitimate business. "I like Singapore because it is a perfect environ­ment to domicile this proposition,“ Foo says. "I welcome all the laws, all the regulatory issues and what customs is imposing on the company because that puts me in a good position not to falter. These are all free watchdogs."

That is not to say that customers of SGPMX cannot gain access to their holdings of pre­cious metals. In fact, those who want to han­dle their gold can also request for a private viewing. Foo says many come from all over the world to do so. “We have customers taking selfies with their gold."

Foo understands their fascination with the precious metal. In 1970, the year he was born, his father bought a Bank Negara gold coin for RM100. "I found it about four years ago, in a box. And inside that box was a purple RM100 note, folded. I valued that coin - it was about an ounce- and it was worth about RM4,000,” he says. Little wonder, then, that Foo believes it is a good idea to invest all his assets in precious metals.